So Chris, tell me a bit about your role here at Tekno.
– So I’m very fortunate, I’m the brand manager here at Tekno. Basically there is so much variety in the role. We’ve got performance cars, McLaren GTs and then we’ve got a link to the Virgin Supercar Championship.

So, ultimately, with someone like yourself you’re the pure definition of someone who is Carbuzzzn. The amount of hours you have to put in for an organisation like this, and the team effort, I can’t imagine you would put in the effort if you didn’t love what you do.
– It’s true, motorsport specifically if you look at just one or two facets of the business, if you’re not passionate about cars, or going to race tracks on the weekend, you’ve got the wrong job. You’ve got it terribly wrong.

You’ve just come away with a win at Bathurst, congratulations. Question for you, what was the first thing you and the team did to celebrate?
– You’re going to laugh at this, we haven’t really had a chance to celebrate. Basically, to take you away from the glitz and the glamour of Bathurst, you go through a lot of processes straight after. So, the moment you win there’s this elation, it was the agony and ecstasy for us in a lot of ways because prior to crossing the finish line we spent he last two laps thinking the car was going to run out of fuel. So, it was a very strange, strange feeling. We all kind of looked at each other for a moment then the emotion took over because we realised we had won it. So from the moment you win, you race down to the podium, everyone celebrates, spray champagne around. Then reality comes straight back so the drivers are whisked away for their media commitments, which just goes into the night.

How different is it from a road car? What’s the experience like? Is it a sensory overload? Is it just a barrage to the senses instead of just being in a nice, calm environment? What does it feel like?
– Okay, so the first thing you notice when you hop into any dedicated race car, is there is no noise insulation. There is nothing in there to make the ride more comfortable. So any of those things, obviously you have no air conditioning, no stereo, no packing in the doors to make it a little bit quieter. So, you’re immediately assaulted audibly, that’s the first thing that gets you. Then there’s the violence of the acceleration. They only need to be fast. When you think about it, they don’t have to be comfortable for a family of 5. They don’t need airbags, although they’re very safe with the structure, it’s only designed to go fast. So, the first time you go in one, you can hear all these noises like the gear box whine, every clunk and bang of suspension movements because there is nothing to make it more accommodating or to make it more compliant. So, that’s the first thing that hits you. Another thing you notice when you first hop into something that has slicks on it is the amount of grip available. It’s a reasonably narrow window, so where as a road tyre when you hop in your road car, you can drive down to the shops and you can be pretty sure that there’s gonna be grip in those tyres even on a cold morning. Where as the slick needs to be at a certain temperature, to actually start developing grip. That can catch you out the first time you actually have the opportunity to jump into a race car because while it’s cold, the grip isn’t there that you think it should be. From then on the experience is dominated obviously by speed and being able to actually push the power as hard as you want to, you’re not trying to compensate for a lack of breaks or lack of tyre grip. Generally when you’re in something like a V8 supercar there’s not a lack of power either. You know you have 650 horsepower so there’s plenty of acceleration to go with that but it kind of assaults you in every which, way, shape and form. You’re also in a harness. Your body can’t move so, you can actually just focus your hands to concentrate on steering the vehicle and basically just want to look ahead and get on the throttle as early as you can in the most simple terms.

So thanks very much for introducing yourself and letting us know what you do here and what excites you. 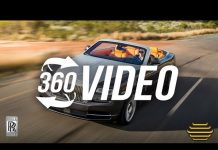 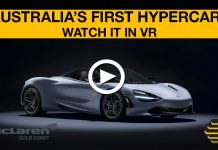 The Most Powerful Rolls-Royce Ever!