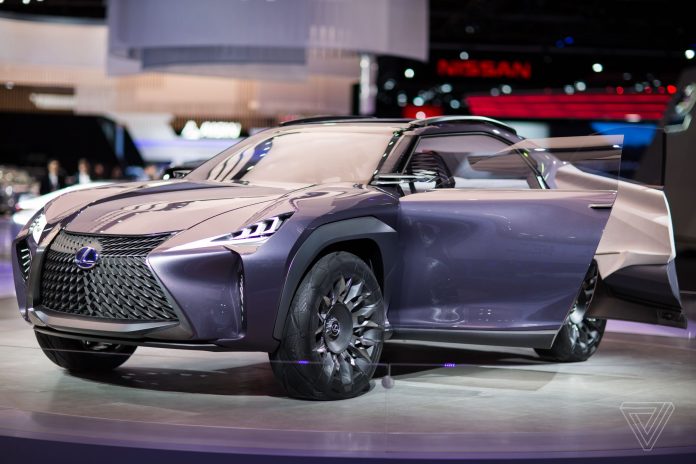 So, Lexus unveiled a new concept and direction at the Paris Motor Show with the UX Concept SUV. They also allowed many Americans the chance to see it up close at the Detroit Auto Show.

The new model was without a doubt, the most eccentric car on display with many calling it ?a lavender Transformer car? and that is exactly what it looks like!

From the rear and the side, the UX Concept looks extremely charming and round crossover SUV. Suddenly it hits you ? it really is a lavender transformer car! Looking at each and every one of the curves the UX Concept boasts, it has dozens more sharp angles to contrast. The car is quite a small SUV but you can?t help but notice the impact the enormous front grille has.

The interior of the UX Concept looks like a supervillain?s lair. The pedals are sharp and the corners of each and every crevice of this car has an edge appeal that is a mixture of a high end female bat mobile. The seats were so special, they had their own press release earlier in September last year.

As the same with most Lexus cars, the grille captures the most attention but this grille, it huge even for Lexus criteria. The grille creates a sense that it?s hungry and it?s about to chew you up and spit you out with what seems like an endless row of sharp teeth. You?ll either hit the ground running quicker than a Porsche hits 60kms when the UX Concept stares in your direction. Or you could make like a #BossGirl and buy it the second it is released because every boss girl need a miniature, lavender batmobile.

Apparently the UX Concept was such a hit at the Detroit show with many car show attendees in awe. They had such mixed feelings on which, if any, of the UX Concept?s crazy ideas Lexus will actually use? Want to read more? Check out the article here at The Verge.